Last week something unbelievable happened. It’s a beautiful example of how awesome people can truly be. I coach my oldest son’s hockey Atom (8 & 9 year olds) team, and one of his teammates, Matthew, will be having brain surgery this week to remove a tumour, which thankfully is 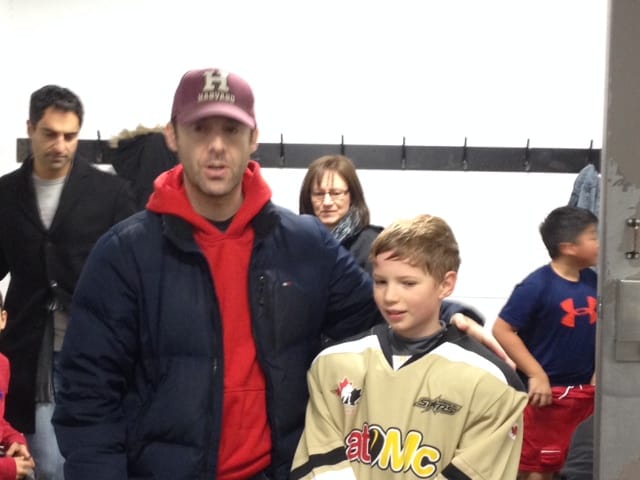 benign. If there’s any good news in this it’s the fact that the tumour is not cancerous. However, he’s still having brain surgery and just played his last hockey game this past weekend. By the way, he scored his first goal of the season with less than 1 second left to go in the game… I’m hoping this is a sign of how things will turn out for this fantastic kid! As a parent I can’t imagine what Matthew’s parents are thinking right now. Fear, nervousness, tension, anxiety, worry, and the list goes on.

The other 2 coaches and I came together after his mom told us the news and decided we wanted to do something special for Matthew. His favourite hockey player is David 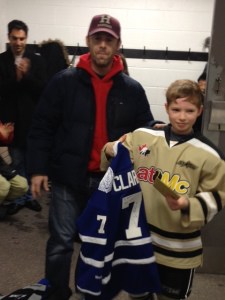 Clarkson of the Toronto Maple Leafs, and what happened during the following couple of days was nothing short of remarkable, in my opinion.

I sent an email to a long-time network contact of mine who worked at Maple Leaf Sports & Entertainment, the owners of the Toronto Maple Leafs about Matthew’s story. She responded immediately and offered to help by making some phone calls. Less than 72 hours later I was speaking with the individual who said to me bluntly, “100% without a doubt we will make this happen”… and he absolutely followed through on his promise. 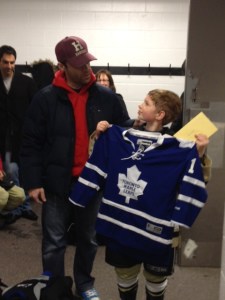 Less than 1 week after I sent the first email I had a properly sized autographed David Clarkson jersey at the doorstep of my house, in time to give to Matthew after his last game a day later. I was astounded by this — an absolutely phenomenal example of how good people can be to one another. But… the story gets better.

During one of the conversations I had with the fantastic person who made all of this happen, he told me that after David Clarkson heard the story he wanted the opportunity to meet Matthew in the hospital after he had his surgery. I was blown away by this because all I could think about was Matthew and his big smile, not once but twice when David Clarkson walks in the room to surprise him. And… Matthew 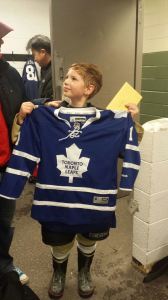 has absolutely no idea that his favourite hockey player will be visiting him in his hospital room before Christmas.

In the grand scheme of life what happened this past week was small, yet it was huge because it’s a story about a group of people (more or less strangers) coming together to make a 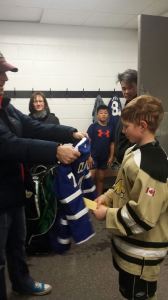 difference in a young boys life. His eyes lit up when I presented him with the Clarkson jersey, and that made it worth our efforts. I can only hope he’ll make a full recovery and lead a normal life. For now though, I feel at ease knowing he’s smiling wearing the jersey of his hockey hero. To Mardi Walker and Glenn Knight, I thank you both from the bottom of my heart. To David Clarkson and the Toronto Maple Leafs organization, I thank you… you have no idea how much of an impact your generosity has already had on Matthew, and will have for a long time to come.